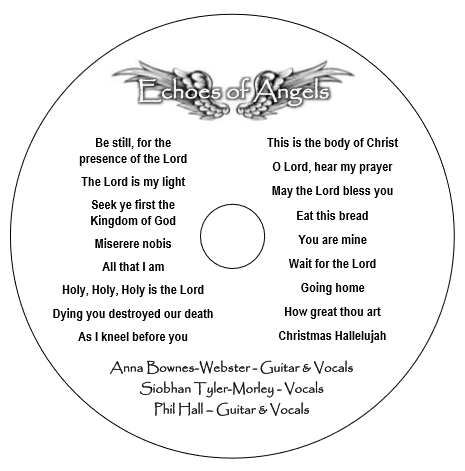 Contact Siobhan Morley via Facebook or WhatsApp to order yours in time for delivery before Christmas.  Many thanks.

I have created a 20 minute video on YouTube for Holy Saturday with a few tunes that Anna, Phil & I recorded and some solo duets for the ones that we hadn't recorded.  Please follow the link below:

I have created a small video on YouTube for Good Friday with a Taize tune that Anna, Dot & I recorded a few years ago.  Please follow the link below:

I have created a small video on YouTube for Maundy Thursday with a Taize tune that Anna & I recorded a few years ago.  Please follow the link below:

As Echoes of Angels were unable to host the Taize evening tonight, we decided to post a little YouTube video containing 3 popular Taize tunes:

AIM OF OUR PARISH:

As you will be aware all Masses, services and events at St Joseph’s church and Blessed William Richardson church have been suspended due to the Covid-19 outbreak.

Updates, as made available, will be placed on the Bulletin, on the

During the Parish Renewal in 1980 we established a vision of our Parish as:

What we have learnt at St Joseph's Dinnington -
Six Key Ingredients

There is a need to invite the whole parish to 'gather' at key points in the development process. This might be a parish weekend or a retreat or a series of "Tuning In" Meetings.

Although large meetings are very beneficial, they are also difficult for many people in all sorts of ways. So some way of inviting everyone's voice needs to be found. This part of the 'process' will benefit from a re-visit perhaps at least once every two or three years?

There is a need to become clear about what the Parish is about, possibly through a Mission statement. This might be the beginning of the process for some parishes.

During a parish renewal in 1980 we established a vision of our parish as:

Ways of facing the issues of conflict, power and authority need to be found.

We have found that conflict is inevitable and indeed perhaps necessary. It is essential to be able to draw out and listen to what is causing the conflict and to integrate this into the process.

The direction needs to be guided. Things need to happen in between larger parish meetings and the larger meetings need to be prepared for and organised. We have done this through our Reflection Group.

Workload and activity must be shared and indeed the 'organising work' of the priest minimalised. Organising groups need a brief and need to report back ultimately to the full parish.

6 Regular Open meetings including an annual day or event.

Once the process is established, perhaps an open parish meeting three times a year.

The principles of our Reflection Group are:

Different types of organising groups are formed on the basis of the following principles:

The Parish was founded in 1912 and serves 18 villages

1904: A priest from Oldcotes rode to say Mass for people working on the sinking of the Colliery Shaft. Mass was said in one of the Nissen huts in what was called "Tin Town". Patrick Kennedy, an Irish Altar Server, rode on his bicycle to Kiveton Station to collect the Altar Stone for the tin chapel at Dinnington Colliery.

1956: Church extended. Bishop Heenan blessed the church extension and told the people that next time he came he wanted to bless a school.

1981: Fire in St Joseph's Church. Church re-ordered after the fire.

History of the Priests:

c1943-?: Fr Scannell - Mrs Cecelia Bass was his housekeeper, who followed him to his subsequent parishes. He baptised Margaret Wareing in 1943, hence we know 1 year he was priest. By the time of his death, he had been made Monsignieur.

1964-1970: Fr John Harland Jackson - Preached the famous sermon about St Joseph: ‘He was no bloody pansy he was a full blown man’. Born in 1922. Died 17/06/2005. Studied for priesthood at Ushaw College. Ordained 13/04/1947 in Leeds. Served as Curate at: Christ the King, Leeds; St Thomas More, Sheffield; Our Lady of Perpetual Succour, Leeds; & St Wilfrid's, Ripon. Fr Jackson moved from Dinnington to St Philip's, Leeds. In 1977, became Parish Priest of Blessed Sacrament, Athersley. His final appointment was at St Patrick's, Harworth, where he ministered for over 20 years.

1970-1977: Fr Patrick Waldron - Housekeeper was Mrs Margaret Winifred Wareing, who followed him to Fagley. Knew the Manager of Huddersfield Town and took the young people of the parish to Old Trafford and allowed Mr Capper to take the top class to see the Aussies at Chesterfield

1977-2008: - Fr Brian Green - Ordained on 19 July 1953.  Fr Brian was the young priest who attended the opening of the school with Bishop Moverley. He chose the hymn 'Light up the fire', to everyone’s amusement, when the church was re-opened after the fire. Father Brian has been going to Ireland for 50 years now. Father Green died on Friday 8 June 2012 after a major stroke aged 84.